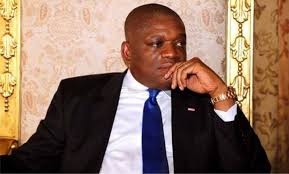 Former governor of Abia State, Orji Uzor Kalu and the current Chief Whip of the Nigeria Senate, will have his trials on Tuesday before justice Inyang Ekwo of federal high court.

The Economic and Financial Crimes Commission (EFCC) the Nigerian anti-graft body,  had in the last twelve years prosecuted Kalu from the Federal High Court up to the Supreme Court and sentenced him to 12 years imprisonment before his lawyers in mid 2020 secured judgement for a ‘retrial.’

Senator Orji Uzor Kalu is facing trials for money laundering related case to the tune of N7.1 billion, he was earlier found guilty and sentence to twelve years imprisonment by a federal high court in Lagos division.

The supreme court quashed the sentence in a unanimous judgment on the 8th many 2020 on the ground of the trial judge’s lack of jurisdiction to try Kalu at the time.

The Supreme Court’s judgement maintained that Justice Mohammed Idris, was already elevated to the Court of Appeal, as at the time he sat and delivered judgement against the Defendants (Orji Uzor Kalu and others).

Kalu’s defence Counsels picked holes in the conviction of their client, stating that it wasn’t part of the Court procedure to have a trial judge already elevated to the Court of Appeal to stoop lower to the Federal High Court to sit in judgement, hence, they pleaded that the Supreme should declare Kalu’s conviction a nullify.

The Supreme Court held inter alia: “The fiat that was issued to him by the Court of Appeal President pursuant to section 396(7) of the Administration of Criminal Justice Act, ACJA, 2015, was a nullity.”

It further ordered that the charge in suit No. FHC/ABJ/CR/26/2017, which EFCC entered against Kalu and his co-defendants, should be remitted back to Chief Judge of the Federal High Court for re-assignment to any other judge for the trial to commence de-novo (afresh).