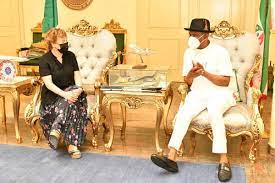 British High Commissioner To Nigeria, Catriona Laing on Tuesday said there will be a spotlight on Nigeria in 2023 as the country holds its general election.

She said this while briefing journalists following her meeting with Governor Nyesom Wike in Port Harcourt, Rivers State Capital.

She promised better relations with Nigeria to consolidate the existing gains from the bilateral association and improve the nation’s electoral system.

Laing said the 2023 general elections is not only crucial to Nigeria but important for the advancement of democracy in Africa.

According to her, the UK government is committed to partnering with Nigeria to tackle the security challenges across the country to specially, guarantee the smooth conduct of the 2023 general elections.

On the issue of insecurity, the British High Commissioner said the UK government, through its military presence in Nigeria, is sharing and comparing notes with the Nigerian security forces on its counter-terrorism operations in other parts of the world, including Northern Island, Iraq, and Afghanistan.

Laing, however, warned that these kinds of security challenges are not solved by military actions alone.

She noted that the solution to the challenge will include the rebuilding of trust with the Nigerian people and “tackling the underlying economic driver”.

She also said mentioned the concern of the British Government on the issues bordering on environmental safety and protection following complaints by the civil society groups, particularly the ongoing Clean-up exercise in Ogoni Land.

The British Envoy said her discussion with Governor Wike also bordered on the prospect of the state’s economy and the creation of jobs.