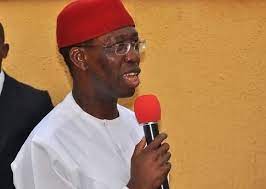 The Accountant General of the Federation, Ahmed Idris on Tuesday while appearing before the Senate committee investigating the status of recovered loot noted that the fund has been returned to the state.

However, the Chief Press Secretary to the state government, Olisa Ifejika, on Wednesday countered the Accountant General’s claim, insisting the oil-rich state is yet to receive the money.

“We appreciate the efforts of the Federal Government to return the recovered loot to Delta State where it rightly belongs. But the truth is that the money has not hit the Delta State government’s account.

“We saw it yesterday like every other Nigerian when the Accountant General of the Federation Ahmed Idris while appearing before the House of Reps committee on recovered loot made that statement and there was this avalanche of enquires to know whether that money has come to us and the truth is that the money has not come.

“We are happy that they have shown willingness to return send the money and we know that very soon, the money will come,” Ifejika said while addressing journalists at the Government House in Asaba, the state capital.

He assured that the Delta State government will ensure that the funds are judiciously utilised to improve infrastructure across the state, once received.

The loot – £4.2 million – was seized from the associates of convicted former Governor of Delta State, Ibori by the United Kingdom and recently returned to Nigeria.

Where Is The Loot?

The recovered loot was recently received by the Federal Government from the United Kingdom.

Mr Idris while appearing before the committee investigating the status of recovered loot stated that “all recovered funds that belong to the respective states are paid directly to the states.

When asked specifically if the Ibori loot was returned to Delta State, he responded that: “It was paid to the state, it was paid to Delta State. Any recovery that is arising from any state, goes to that state. State governors will not even allow it to fly, they will take the federal government to court. We pay them their money.”

The Accountant General’s response contradicts the earlier position of the Federal government on the recovered loot.

Earlier in March, the Attorney-General of the Federation, Abubakar Malami had said the Ibori loot would be used for the construction of the second Niger Bridge, Abuja-Kano road, and Lagos-Ibadan Express road and not returned to the Delta State Government where it was pilfered from.

During his appearance on Channels Television’s Politics Today, he argued that the law that was alleged to have been breached by Ibori was a federal law and that the parties of interests involved in the repatriation of the funds were national and not sub-national governments.

“The major consideration relating to who is entitled to a fraction or perhaps the money in its entirety is a function of law and international diplomacy,” Mr. Malami said.