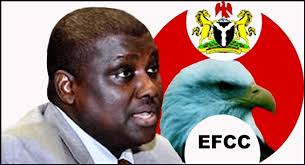 The Federal High Court in Abuja on Wednesday rejected a request by the lead defence lawyer, Sani Katu, to withdraw from the legal team of the chairman of the defunct Pension Reform Task Team (PRTT), Abdulrasheed Maina.

The decision by Mr Katu, a Senior Advocate of Nigeria, to withdraw from the N2 billion money laundering case comes less than two months after he was engaged by Mr Maina to lead his defence.

The application was opposed by the counsel prosecuting the defendant for the Economic and Financial Crimes Commission (EFCC), Farouk Abdullah, who said the defence lawyer failed to meet the conditions to withdraw from the case.

The trial judge, Okon Abang, upheld EFCC’s objection and dismissed Mr Katu’s application on the grounds that he failed to give three days notice to the court to quit as provided in section 349(8) of the Administration of Criminal Justice Act (ACJA), 2015.

“From the record of the court, no such application has been filed,” the judge said.

“It is not a sentimental issue.

“It is an issue of law which cannot be overlooked, notwithstanding the enviable position of the learned senior counsel at the bar.

“The non-compliance goes to the root and affects the foundation of the application to withdraw.”

The judge also noted that a lawyer, by virtue of section 349(7) of ACJA, was bound to appear in a case till judgment, but could be allowed to quit for special reasons communicated to the court via a three-day notice.

Mr Abang said Mr Katu failed to give any reasons for his decision to quit.

“This application to withdraw is to compound the matter before the court. The application is not made in good faith.

“The application lacks merit and it is hereby dismissed,” the judge added.

The judge after dismissing Mr Katu’s application ordered the lawyer to present the next defence witness as earlier scheduled.

Mr Katu, who was set to call the second defence witness, was however informed by Mr Maina that the witness scheduled to appear, Charles Enakaeno, was unable to attend court because he had an accident on Tuesday.

The lawyer sought an adjournment till Thursday, a request the prosecution did not oppose.

The judge then adjourned till Thursday.

Katu distances self from Malami, Magu, others’ summons

Mr Katu’s decision to withdraw from the case, PREMIUM TIMES reports, is an offshoot of the disagreement on the defence strategy between him and another lawyer, Anayo Adibe, who had been engaged by Mr Maina before Mr Katu was brought in to lead the defence team in February.

Mr Katu at Wednesday’s proceedings distanced himself from the series of subpoena applied for by Mr Maina to be issued on the Attorney-General of the Federation, Abubakar Malami, and others.

PREMIUM TIMES reported on Tuesday that the court had at the instance of Mr Maina issued a subpoena on Mr Malami, the Governor of Central Bank (CBN), Godwin Emefiele, a former acting chairman of the Economic and Financial Crimes Commission (EFCC), Ibrahim Magu, and human rights lawyer, Mr Femi Falana, to testify for the defence.

Mr Katu said on Wednesday that he only applied for three out of the over 10 subpoenas issued by the court.

He said the three subpoenas he applied for were for bank officials, while the rest were requested from the court by the other lawyer engaged by Mr Maina.

The judge, Mr Abang, also in his ruling dismissing Mr Katu’s application to withdraw from the case, said media reports gave the impression that he on his own issued the subpoenas.

He explained that he only signed the subpoenas on Monday in compliance with a judgment of the Court of Appeal, in Abuja.

He recalled that the Court of Appeal had given the judgment to compel him to sign a subpoena requested by a former spokesperson for the Peoples Democratic Party, Olisa Metuh, for the summoning of a former National Security Adviser, Sambo Dasuki, in 2019.

He said he was bound by the judgment to sign the fresh applications for subpoena brought by Mr Maina.

Mr Katu’s decision to withdraw from the case on Wednesday comes about three months after two lawyers opted out of the defence team.

There are other lawyers who had at various times led Mr Maina’s defence but suddenly disappeared without formally applying to quit the case.

In December 2020, Joe Kyari-Gadzama, SAN, formally withdrew as Mr Maina’s lead defence counsel, while Adeola Adedipe withdrew as the lawyer to the defendant’s firm, Common Input and Investment Ltd, which is being prosecuted as second defendant in the case.

The withdrawal of the lawyers from the case coincided with his production in court after he was arrested in Niger Republic where he had escaped to on jumping bail last year.

Mr Maina, who was remanded in Kuje prison in Abuja after his production in court, had engaged a new lawyer, Anayo Adibe, who filed a fresh bail application for the defendant on medical grounds.

The bail application was argued by Mr Katu, who was engaged by Mr Maina to reinforce his legal team.

The judge, on February 19, dismissed the fresh bail application, and Mr Maina thereafter opened his defence with Mr Katu appearing as the lead defence counsel.

Mr Katu had appeared in the case up to Tuesday.

But before the court went into the scheduled business for Wednesday, he announced his decision to withdraw.

He has yet to inform the court the reason for his decision to leave the case.

Mr Maina and his firm are being prosecuted by the EFCC for laundering about N2 billion.