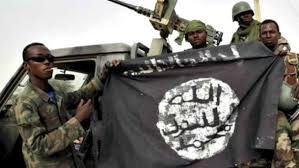 Gujba town in Gujba Local Government area of Yobe state, Northern Nigeria, was attacked on Saturday by Boko Haram terrorists. This is the second in few days, in the state, two days ago, the dreaded Boko Haram insurgency attacked Geidam community in the state, it was reported that in Geidam, the insurgent burnt down shops and they made away drugs in the local hospital.

According to news monitor in channels Television, a local source confirmed the attacked in Geidam after the terrorist first laid ambush to a military patrol vehicle on the high way that leads to the community, there after  stormed the village and set some houses and shops ablaze.

The local said they had to coverage in the bush but they could see smoke everywhere, in their community from their hidden place.

The attack was later confirmed by the Yobe state police command, the Yobe state  police public relations officer, ASP Dungus Abdulkarim, could not give the number of casualties immediately.

The recent attack has created fear among the residents considering the fact that where the attack took place is just 30 kilometres away from Damaturu, the state capital and 24 kilometres south where the Tactical headquarters of 27 Taskforce Brigade of the Nigeria Army, Bunigari is located.

Although relative calm has returned to the area, authorities are yet to disclose the number of casualties and properties damaged.