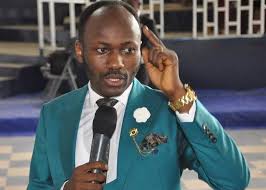 Apostle Johnson Suleman, The founder of Omega Fire Ministry (OFM),  has slammed a critic who called him out for buying a third private jet.

Apostle Johnson Suleman had faced heated backlash since he revealed that he acquired his third private jet during the COVID-19 lockdown.

On Friday, the clergyman took to social media to celebrate the posthumous birthday of Benson Idahosa, founder of Church of God Mission International, who died on March 12, 1998.

Suleman wrote: “He (Idahosa) was called to glory this day 1998..a fearless and bold leader..a man who spoke truth to power..a man who stood by every minister of the gospel..he had a large heart of gold..he was always a shoulder to cry on..we miss you.. Earth lost,heaven gained.. We miss you PAPA.”

But a user had asked the clergyman man if he thought Idahosa should have also owned three private jets.

Suleman, however, fired back, explaining that buying a third private jet doesn’t mean the first two he bought were still being used by him.