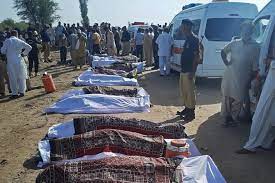 A Millat Express train from Karachi to Sargodha derailed near Ghotki and collided with a Sir Syed Express train bound for Karachi. Ghotki is roughly 330 kilometers northeast of Karachi.

More than a hundred people were hurt, and rescuers and villagers are still working to pull survivors and the dead from the wrecked cars.

The accident, according to authorities was said to have occurred around 3:30 a.m. Deputy commissioner of Ghotki Usman Abdullah says it is unclear what caused the derailment, and the driver of the second train said he braked when he saw the disabled train but didn’t have time to avoid the collision.

Officials said more than 100 passengers were injured, and those with critical injuries would be brought by helicopter to a nearby city’s hospital. According to railway officials, about 1,100 passengers were on board the two trains.

Pakistani Prime Minister Imran Khan expressed his deep sorrow over the tragedy, saying on Twitter that he had asked the railway minister to supervise the rescue work and also ordered a probe into the crash.

According to local media, some of the passengers on the Millat Express were heading to a wedding party.