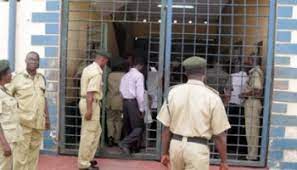 An attempt by some inmates to escape from the Nigeria Custodial Centre, Kurmawa in Kano State was on Thursday evening foiled by security agencies.

According to sources, the incident occurred when some “condemned inmates” numbering about 150 staged a protest that officials should allow them to consume illicit drugs and use other prohibited items such as handset smuggled into the facility by yet to be identified person.

Other sources however say that the inmates were protesting the poor quality of food they were served for iftar during the breaking of fast by Muslims, despite a befitting arrangement put in place by a popular philantropist.

Confirming the development, Public Relations Officer, Kano State Correctional Center, Musbahu Lawal said the mayhem was not as a result of the food but the inmates want officials to allow them to consume illicit drugs and handset into the facility.

Musbahu said the Command’s Comptroller, Suleiman Suleiman has set up a committee to investigate how the illicit drugs and handset were smuggled into the facility.