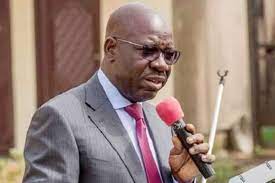 The land dispute that resulted in the killings of persons in Sabongida-Ora in Owen West Local Government Area of Edo state, is given the Edo state government sleepless night.

In a bid to put a lasting solution to the menace, the state Governor, Mr. Godwin Obaseki has prohibited access to all parties involved in the land dispute. The governor was accompanied by the security chiefs on a fact finding mission in Sabongida-ora, to see things for him self.

The Governor reassured that the government will do everything to ensure that the communal clash is brought to an end. The governor urged Commissioner the of Police in the state to ensure that his directive is completely obeyed by Saboginda-Ora and Uhonmora people until the issue is resolved.

The governor noted, “All the land affected must be vacated immediately. I don’t want to see anybody on the land affected by this crisis. Farming or any other activity must not go on in that land as all activities must be suspended until a decision is reached on the matter. Commissioner of Police, please make sure your men enforce this order.

“My mission here is to restore peace and find out the problem, as there has to be immediate, short and midterm actions. There are lives lost; the issue must not be swept under the carpet as it is government responsibility to protect lives and properties.

“The issues are social, economic and security issues and the solution has to be encompassing and we all have to be alive to solve it.”

He continued: “I am here with security chiefs to evaluate the security situation and take certain decisions. I am glad that the situation is under control and will not take it for granted as security agencies will continue to be here to ensure normalcy is restored.

“I will consult to find out and evaluate whether we would set up a Commission of Enquiry, Tribunal of Enquiry or just a Panel of Enquiry. We would decide and give everyone the opportunity to air their views on how it will be resolved permanently.”

The governor appealed to the youths and elders of the affected to allow peace reign, reassuring that his administration is doing everything possible to ensure that all his campaign promises are fulfilled.

He stated: “When I came for the campaign here, I made some promises, which we are working on. We have already completed a review of Sobe-Uhonmora Road as the contractor will be moving to site within the next few weeks. That infrastructure will open up that axis. I am in talks with the Central Bank of Nigeria (CBN) under their Cassava programme to establish the programme in Owan West.

“I have also asked the Permanent Secretary of the Ministry of Agriculture to demarcate between 5,000 and 10,000 hectares of land for the Cassava programme. Also, in partnership with the World Bank, we are finalising plans to establish the Technical and Vocational school in Uzebba. We are working to complete these action programmes for the development of the area, but we need peace to actualise these.”

“I am appealing to the youths to sheath their swords and allow peace to reign as action will be taken after Easter celebration,” he reassured.

On his part, Head of Local Government Administration in Owan West, Dr. Raymond Ogieva said, “The crisis started on Sunday when someone was killed as a result of land dispute and a reprisal on Monday, putting the whole community in tension. Security agencies stepped in to calm the situation.”