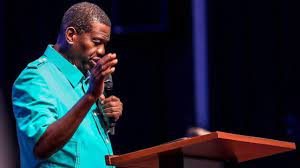 President Muhammadu Buhari; former President Goodluck Jonathan; former Vice President Atiku Abubakar; President of the Senate, Dr. Ahmad Lawan; his predecessor, Dr. Bukola Saraki; Speaker of the House of Representatives, Hon. Femi Gbajabiamila and some governors yesterday led dignitaries who condoled with the General Overseer of the Redeemed Christian Church of God (RCCG), Pastor Enoch Adeboye, his family and the members of his church over the death of his son, Dare.

Some of the governors who commiserated with the cleric included: Prince Dapo Abiodun of Ogun State; Babajide Sanwo-Olu of Lagos State and Rotimi Akeredolu of Ondo State.
The Pentecostal Fellowship of Nigeria (PFN) also described as tragic, the demise of the son of Adeboye.

RCCG had earlier yesterday announced the death of Pastor Dare Adeboye, the third child of the 79-year-old Adeboye.
The 42-year-old junior Adeboye reportedly died in his sleep on Tuesday in Eket, Akwa Ibom State, where he was based with his family.

In an official statement issued yesterday via its verified Twitter handle, @rccghq, the church said though it was shaken by the sudden death of the young cleric, its anchor remained Jesus Christ.
It stated: “It is with a deep and heartfelt sense of loss, we announce the departure of our beloved son, brother, husband and father, Oluwadamilare Temitayo Adeboye, who went to be with the Lord on the 4th of May, 2021.

“His life was well lived as he served the Lord without reserve, giving effortlessly and leading fearlessly. He was crowned by the Lord with the blessings of three seeds and a beautiful wife.
“Though shaken, our anchor remains Jesus Christ in whom we have the assurance that we will one day meet in a place where there is no pain. It is the wish of the family to be granted privacy at this moment and that prayers be offered on their behalf.”

Born on June 9, 1978, Dare would have clocked 43 next month.
In his condolence message, Buhari, in a statement by his Special Adviser on Media and Publicity, Mr. Femi Adesina, urged Adeboye, his family and the church to “find comfort in the teachings of the holy scriptures that those who have chosen to serve God faithfully will see Him as He is in eternity.”
According to it, “President Muhammadu Buhari extends deepest sympathies to the family of Pastor Enoch Adeboye, the General Overseer of the Redeemed Christian Church of God, on the passing of his son, Pastor Dare Adeboye.

“Also commiserating with members of the RCCG on the demise of the Assistant Pastor in charge of Region (Youth) 35, President Buhari urges them to find comfort in the teachings of the Holy Scriptures that those who have chosen to serve God faithfully will see Him as He is in eternity.
“The president prays to God Almighty to grant the departed rest in His everlasting kingdom and comfort the grieving family, friends and associates.”

In a message of condolence to the general overseer and RCCG members, Jonathan expressed sadness over the passing on of the pastor, describing him as a much-loved clergyman.
The former president stated that the deceased lived a life that was a pattern of good works and prayed God to grant his soul eternal rest.

He said: “My family and I condole with Pastor Enoch Adeboye and the entire membership of the Redeemed Christian Church of God, on the death of Pastor Dare Adeboye, son of the general overseer, and a much-loved clergyman.

“Though I never knew Pastor Dare personally, I have had cause to meet his father, Pastor Adeboye, and it would seem that the Apple did not fall far from the tree.
“From every account, Pastor Dare lived a life that was a pattern of good works and a credit to the Body of Christ. He was known to emulate the godliness and moral leadership that his father is well known for.

“We share in the grief that naturally comes when such a devout man passes on to eternal glory. May God grant his family and ministry the fortitude to bear the loss.”
Atiku in his condolence message on his Twitter handle, @Atiku, tweeted: “My thoughts and prayers are with the family of @PastorEAAdeboye in this trying time.
“I pray that God, in this trying time, will comfort and strengthen him and his family by God’s grace.”

Lawan, in a condolence message, said: “I share their deep grief over the loss of a beloved son, husband, father and committed labourer in the Lord’s vineyard. May God Almighty comfort the highly respected pastor, his family and the entire members of his flock over this great loss and repose the soul of the deceased in eternal bliss.”

Lawan’s predecessor, Saraki, tweeted via his Twitter handle, @bukolasaraki: “My family and I send our heartfelt condolences and prayers to @PastorEAAdeboye, his family and the entire @Rccghq community over the passing of Pastor Dare Adeboye.
“We pray that the Almighty grants you all the much needed strength that you need as you mourn this significant loss.”

Gbajabiamila described Dare’s death as painful, saying that the younger Adeboye lived a life full of worship to the Lord and service to humanity.
”I was saddened by the news of the demise of Pastor Dare Adeboye. His demise is painful, especially now that we need youth like him to serve as role models to their peers,” he said
The PFN also described as tragic, the demise of Dare.

PFN, in a condolence message by its National Publicity Secretary, Bishop Emman Isong, described Dare’s death as shocking.
“Our heartfelt condolences to Baba and Mama Adeboye, and the entire members of the RCCG worldwide,” PFN said.

Abiodun in a statement by his Chief Press Secretary, Mr. Kunle Somorin, expressed shock over the death of the young, vibrant and spirit-filled pastor, who according to him, was a role model not only to the youth in the RCCG but also the country.
Abiodun described Dare’s death as heart-wrenching and shocking, saying he was one of the people who had followed the spiritual trajectory of the young pastor in the vineyard of God.

While expressing his condolences to Adeboye, the Ogun State governor commiserated with the entire RCCG family, urging the general overseer to take solace in the fact that Dare served and died in the service of God, noting that his footprints in the church will forever remain indelible.
In mourning Dare, Akeredolu described his sudden death as a tragic loss to the Christendom, Adeboye’s dynasty and the youths considering the role of the deceased in youth mentorship as a regional youth evangelist.

He said: “Undoubtedly if Christ tarries, no one is excused from the tragic end of death. What is most desirable is that we all come of ripe age and live our lives well in the hope that we bury our parents and not the other way round.

“It becomes devastating when a father experiences this kind of loss. This is indeed a big blow to take. Pastor Dare was a promising servant of God. His death in his prime is, to say the least, excruciatingly painful.

“While we condole with our father in the Lord, Pastor E. A. Adeboye, and the entire family of RCCG worldwide on this irreplaceable loss, we urge Pastor Adeboye to take solace in the words of God: ‘He gives and takes. He is an unquestionable God.”

Sanwo-Olu also commiserated with Adeboye and his wife, Pastor Folu.
The Lagos State governor, in a statement by his Chief Press Secretary, Mr. Gboyega Akosile, expressed his heartfelt sympathies, urging the deceased family, friends, associates and entire members of RCCG to take the death of the junior Adeboye in good faith.
He said: “No doubt the death of a loved one is usually painful as it is irreparable but we must always take solace in God, especially if the deceased had lived a good life, just like the late Pastor Dare Adeboye.

“The pastoral and wise counsel of Pastor D, as he was fondly called, will be sorely missed by his family and the entire members of RCCG, especially in Eket, Akwa Ibom, where he played active roles as a cleric before he passed on.”

The governor, government and the people of the State of Osun, in a statement by the Commissioner for Information and Civic Orientation, Mrs. Funke Egbemode, said they received with pain and shock, the news of the demise Dare, and expressed deepest and sincere sympathy.

“Dare was one of your seeds who had chosen to follow closely in his revered father’s footsteps,” the statement said, adding: “No parent deserves this kind of loss. We feel your pain. Our dear state has lost yet again another bright light. We just buried Yinka Odumakin and now we have to mourn the loss of another young one.”