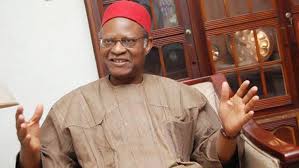 Emeka Anyaoku is one man that has brought honour to his father land Nigeria former Commonwealth Secretary-General The President, Muhammadu Buhari, on Sunday congratulated him on his 88th birthday.

the president goodwill massage was contained in a statement by his Special Adviser on Media and Publicity, Femi Adesina, titled “President Buhari greets former Commonwealth Secretary-General, Chief Emeka Anyaoku, at 88.”

the massage reads “President Muhammadu Buhari warmly rejoices with seasoned diplomat and administrator, Chief Emeka Anyaoku, on his 88th birthday, January 18, 2021, congratulating the former Secretary-General of the Commonwealth for a life that keeps learning and growing in wisdom, knowledge and experience.

“President Buhari acknowledges the worthy contributions of Chief Anyaoku to the development of the country, starting out as a young Foreign Service Officer, and reaching the pinnacle of his career through vision and diligence, and consistently projecting Nigeria as a great nation.

“The President extols the statesmanship of Chief Anyaoku in always counseling leaders and the citizenry alike, particularly bringing a global context to issues and policies, and using his extensive network of international friends to support the country’s efforts in deepening good governance, democracy and sustainable development.

“As the former Commonwealth Secretary-General turns 88, President Buhari prays that the Almighty God will strengthen him in good health, and grant him the grace for greater support to the nation he loves so much.”