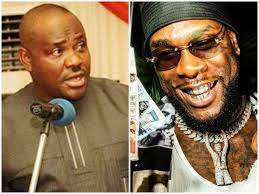 The award known as “Distinguished Service Star of Rivers State, DSSRS” is the second highest distinction in Rivers State Order usually conferred on individuals in recognition of their exceptional service/performance in any field of human endeavour.

Governor Wike conferred the honour on the internationally acclaimed music icon who won the Best Global Music Album with his Twice As Tall album at the 63rd Grammy Awards during a grand reception organised by the Rivers State Government for him in Port Harcourt.

At the award ceremony, which was attended by people from all walks of life, the governor said the honour was to show gratitude publicly to indigenes of Rivers State who have shown outstanding talent with their works and stood out head and shoulders above others in their endeavour.

He also announced that the government will not only allocate a land in Old Government Residential Area of Port Harcourt to the honouree but also give him money to build a house there.