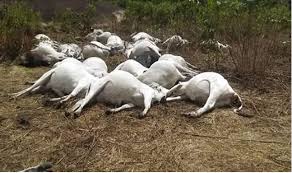 Confusion has set in among pastoralists in Taraba state as 40 cattle died after allegedly eating a type of poisonous grass called ‘killer grass’.

According to Daily Trust, all the cattle belong to a pastoralist in Gamgam village in the Bali Local Government Area.

It was gathered that the incident occurred around 11am Sunday shortly after a boy simply identified as Ja’I led a herd of cattle into a grassland where the cattle ate the poisonous grass.

A witness in the village, Ali Bello, said that few hours after the cattle ate the grass, 40 out of the herd of about 200 cattle died.

He said the grass is found in some locations in the state and it is difficult to identify the species of the grass, especially at the beginning of the rainy season when animals rush to eat fresh grasses.

Bello stated that Ja’I and his family soon after the incident took the remaining cattle to another location to a avoid a repeat of the incident.

He said such incidents were recorded from time to time and poisonous grass has always been a nightmare for pastoralists.

“As I’m talking to you, all pastoralists in this area have migrated out of the area to prevent their herds from eating the killer grass,” he sa