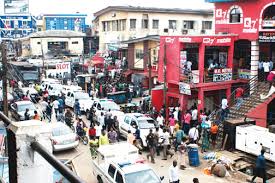 A Lagos High court has barred the daughter of the national leader of All progressive congress Senator Bola Ahmed Tinubu from collecting levies from  traders in computer villager, Ikeaj Lagos.

Folasade Tinubu-Ojo who is the daughter of Senator Bola Tinubu and  the iya-loja general of lagos state, has being on a struggle with the traders in computer village, where some time ago,  she imposed leaders on the traders in a bid to have control over the market.

The imposition of leader on the traders which sparked several protest, did not go down well with the traders who then approached the court to restrain the Iyaloja from collecting levies.

Mrs. Bisola Azeez, Mr. Adeniyi Olasoji, Nofiu Akinsaya, Toni Ikani and the commissioner of police in Lagos, where also barred from imposing levies on the traders.

The judgement reads, “I find that the 2nd and 3rd respondents’ imposition of levies on the applicants is illegal, null and void and therefore amounts to a violation of their fundamental rights.

“Accordingly, it is hereby ordered as thus: The first to fifth respondents by themselves, agents, levy collectors howsoever called are restrained from imposing levies and/or fines on the members of the 1st to 5th applicants at the Ikeja Computer Village in the Ikeja Local Government Area of Lagos State.”

The judgment, was delivered by Justice Yetunde Pinheiro of the Lagos High Court.

In a letter to the traders in computer village, over the court victory, the Chairman Timi Famoroti and the Secretary General Jerry Mba, asked the members not to pay tax to Tinubu’s daughter and the Iyaloja of Lagos or any of her representatives as directed by the court.

They rejoiced over the judgement, “The implications of this landmark judgement is that the Iyaloja General, Chief Mrs. Folasade Tinubu-Ojo, Mrs. Bisola Azeez, And Mr. Olasoji Adeniyi or their representatives or agents cannot collect any form of dues, levies or fines from the members of Ikeja Computer Village Market. Any collection in this regard is illegal.

“We therefore urge you not to submit yourself to any form of payment, intimidation and extortion. It is your right to defend yourself and report to your leaders in case there is a violation of your fundamental human rights.

“Please ensure you document with concrete evidence and report any breach of your right to your leaders. This will help our legal action/s against any violators when necessary. We therefore urge every member to continue to pay your agreed dues to your various associations accordingly.”

The leadership of the traders also admonished the traders to continue to pay their personal and company income, taxes, levies and others to the appropriate government agencies at the national, state and local governments when due. And the traders was also asked to be law abiding and be of good conduct.