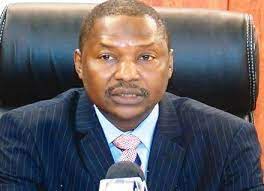 Nigeria’s Minister of Justice and Attorney General of the Federation, Abubakar Malami, on Tuesday announced the deactivation of his Twitter account.

It would appear the minister may have logged into the microblogging platform to carry out the action, but it’s unclear how it was done since the Twitter URL has been suspended by network providers in the country.

Other commentators criticised the minister for alleged violation of their constitutional rights.

Since the post was made by the minister there have been over 9000 reactions in 2 hours. Here are some of the reactions to Malami’s post:

Roy Ekwueme, a Facebook user wrote, “This is an evidence that you logged in Twitter today via VPN to deactivate your account which is punishable under your unlawful law. Let’s see how you will prosecute others without throwing yourself in jail .
Attorney General of nonsense and minister of injustice”

Another Facebook user Charles Ugonna Okafor wrote, “Can’t you guys treat more pressing matters like insecurities, unemployment, corruption, epileptic power supply and lack of social amenities the way you were so fast in banning tweeter as if that’s a fraction of our problems in this country?”

Awwal Seid wrote, “The new EFCC boss should go after you immediately! This is a criminal offence. How did you accessed your twitter account before deactivation or you made use of VPN?”

Abímbólá Olábòdé Adéshínà wrote, “Why did it take you so long , how did you manage to deactivate after the ban sir. You must have connected with VPN before you can deactivate sir.”

Abdulhamid Marshall wrote, “With due respect, the North is keenly begging you to also deactivate banditry and kidnapping in the same haste you banned and deactivated Twitter.”