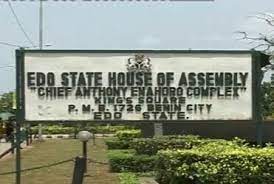 The Edo State House  of Assembly  on Tuesday passed a bill for a law to repeal and replace the provisions of the Edo State Violence Against Persons Prohibition Law 2019.

The law would eliminate violence in public and private life, prohibit all forms violence against persons and provide maximum protection and effective remedies for victims and punishment for offenders.

Leading the debate, Majority leader of the house, Assemblyman Henry Okhuarhobo said that violence against persons hardly saw the light of day at the police stations.

He added that the bill would eliminate the vulnerability of those affected by restoring normalcy in both public and private life of the people in society.

The deputy speaker, Mr Roland Asoro, said that the house was repealing the provisions of the law to address challenges associated with violence in public and private life of the people.

He said that in the 2019 law, prosecution of cases was only restricted to the Federal High court  in Abuja, thereby hampering speedy dispensation of justice which would now be addressed in the new law.

He stated that a committee was in place to review all  cases of abuse with a view to serving justice to victims.

The house, thereafter, dissolved into committee of the whole in a motion moved by the Majority leader, Okhuarobho, and seconded by the  Chief Whip, Mr Emma Okoduwa, to consider the bill.