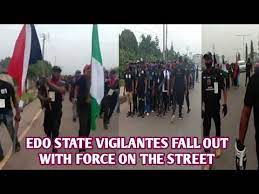 Joint vigilante network of Edo state came out in their hundreds on the road, on a show of force, the road show took off from the parade ground Oba ovoramwen square, in Benin city.

The show of force is to show to the general public that the network is combat ready to make life more secure for the people of Edo state.

However, there was a slow flow of traffic as the vigilante hit the major roads in Benin metropolises. The coordinator of the group  Mr. Emmanuel Oboh Ade, said, exercise like this is needed from time to time to bring out the best in his men.

“our mandate is to fight crime, all kind of crime our operations covers all the 18 local government and all the communities in Edo state even the water ways”

The State Coordinator of the group, Mr. Emmanuel Oboh Ade made the pledge in Benin City today when his men engaged in public combat fitness drills.

In another development the head of operations of the group, chief Osabuehien Agbonlahor said.

“We are for those that say Benin will not get peace, we are here to tell them, we will deal with them except they relocate.

Our reporter engaged some of the vigilante, and they said the exercises is a welcome development, that it will make them more fit and combat ready to fight crime in the state.