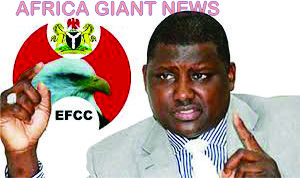 The trials of the former Chairman of the Pension Reform Task Team (PRTT) Abdulrasheed Maina has gotten another dimensions as the Economic and Financial Crime Commission has revealed why he should not be granted bail the second time.

Late in 2020, he was apprehended in  Niger republic after he jumped bail, for money laundering case leveled on him by the Economic and Financial Crime Commission. He was eventually apprehended and repatriated to Nigeria from neighboring country.

There’s a new twist to the case, the EFCC has asked the court not to grant him a new bail, the anti-graft agency claimed Maina “sneaked out to Niger Republic after jumping court bail was to obtain new travel documents at the Embassy of the United States of America (USA) in Niamey to enable him flee back to the USA with his family where he and his family are equally citizens.”

The anti-graft agency claimed the Maina sneaked to niger in other for him to obtain a flesh document from the America embassy where him and his immediate family will travel to, and the anti-graft also said that maina and his family are also citizens of the united state of America.

The agency told the court that the traveling document of maina has be deposited with the Registrars of the federal high court and the high court, of  the federal capital territory (FCT), as part of the condition attached to the bail granted him last years by both courts.

The agency asked the court not to granting Maina flesh bail, this was contained in a flesh filed to opposite the bail in view  of his pasted antecedents of jumping bail.

The Economic and Financial Crime Commission also faulted his claim of his health deteriorating, on which he is making the flesh bail application.

“The first defendant (Maina) did not suffer or undergo any treatment for any health challenge in his knee whether in Nigeria or in Niger Republic,” it said.