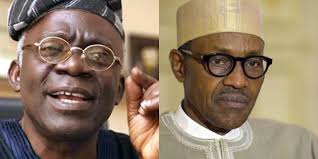 A group called the Alliance on Surviving COVID-19 and Beyond (ASCAB) in a statement on Saturday said the Nigerian President, Muhammadu Buhari, should be held responsible for the worsening security situation in the country.

This submissions was made by the interim chairman of the group, Femi Falana (SAN), he said the communal clashes occurring in communities across the country could have been avoided if the Nigerian government had intervened.

Falana said the federal government has failed to protect the lives and property of it citizenry, as provided in the constitution, hence, the people has resulted to self-help to defend their territories.

He expresses his worries over the wave of attacks by armed groups in the country, and he said, if not checked, it could lead to a civil war.

He advocated for a self defence groups that will be funded by the state and local governments for the protection of all communities in the country.

Falana statement read, “Apart from Section 14 (2) (b) of the Constitution which states that the welfare and security of the people shall be the primary purpose of the government, sections 33 and 43 of the Constitution guarantee the fundamental rights of citizens to live and to own and acquire property in any part of the country.

“But the Federal Government has failed woefully to provide for the welfare and security of the people of Nigeria. In particular, the government has refused to halt violent attacks by armed herders, bandits, kidnappers, terrorists, and armed robbers which have claimed thousands of lives and destruction of property.

“Since the government has failed to protect the people, a number of citizens and groups have resorted to self-help to secure their communities.

“We are however worried that the wave of attacks and counter-attacks by armed groups in several parts of the country could lead to a civil war.

“Therefore, the Alliance on Surviving COVID-19 and Beyond (ASCAB) hereby calls on all aggrieved individuals and groups to hold the Federal government accountable for the worsening insecurity in the country.

“President Mohammadu Buhari ought to summon an emergency meeting of the Nigeria Police Council to address the challenge of insecurity and adopt measures to secure the life and property of every person in Nigeria without any further delay.”

The group also call on all the security agencies to adopt drastic measures to halt violent attacks on communities by armed groups, while calling on the government to put up their thinking cap and put a stop on the insecurity situations in the country.

The call on all aggrieved individuals and groups to liaise with the human rights community in other to ensure the immediate arrest and presecution of all criminal elements who are attacking law-abiding Nigerians.