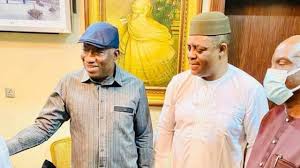 The former aviation minister stated this in his verified tweeter handle, “My team and I had the honor and privilege of spending a wonderful evening with President Goodluck Jonathan in his Abuja home last night. None like him.”

This is coming amid rumour over his defection to the All Progressives Congress, APC.

Recall that Governor Yahaya Bello of Kogi State had disclosed that the former minister had dumped the PDP and move to APC.

Bello had said the former minister joined the ruling party to add his positive energy.

The PDP chieftain, however, countered Bello’s claim, insisting that he was still a member of Nigeria’s leading opposition party.

Fani- Kayode had met with both Bello and the interim Caretaker Chairman of APC, Mai Mala Buni in Abuja where they had a fruitful discussion on how to move Nigeria forward.