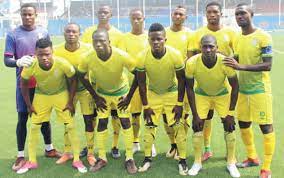 Football enthusiasts in Yenagoa, the Bayelsa State capital have condemned the unruly behavior exhibited by fans of Remo Stars Football club against players and officials of Bendel Insurance FC in a match day twenty one group B2 game of the Southern conference of the Nigeria National League, NNL played at Ikenne Ogun state on Sunday.

Remo Stars who were at home allowed their supporters to beat up two Bendel Insurance players and secretary Charles Ihimekpan with other players seen escaping the stadium through the fence in a video that went viral on Sunday night.

Reacting to the development, the Zonal Vice President Youth Sports Federation of Nigeria YSFON Mr. Kali Gwegwe said the display was unwarranted and barbaric especially in modern day football where the game has gone digital.

He called on the Nigeria Football Federation and organizers of the league to sanction Remo stars FC and perpetrators of such violence in order to curtail the acts of hooliganism and insecurity in match venues across the country.

Another football enthusiast, Alaowei Mieseigha called on the league body to banish Remo Stars from Ikenne as well as place a fine on the team to serve as deterrent to others.

Also, Raphael Okolai noted that if strong measures were not taken against Remo stars, fans would continue to molest visiting teams whenever the home team fails to win a match on their ground.

Mr. Okolai also frowned at the nonchalant attitude of security personnel deployed at the venue as they watched helplessly while the fans took laws in their hands.

In February this year the Nigeria Women Premier League banished Bayelsa Queens from Yenagoa to Owerri for pitch encroachment, fining the club 2.4million naira while last month the Nigeria National League banished Holy Arrows of Oleh to Enugu State when their fans invaded the pitch during a home game.