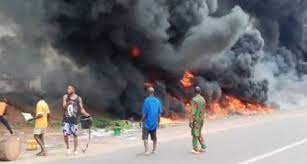 Tanker explosion in Oshigbudu, Agatu Local Government Area of Benue State have claimed lives of many residents of the community.

News men gathered that the incident occurred on Sunday afternoon when a tanker conveying petroleum product, fell on the road side in a residential area of the community.

The inferno, according to an eyewitness, razed shops and houses of residents of the area.

According to him, a statement will be issued subsequently, noting that he would inform the state governor, Samuel Ortom on the incident.

“The fire inferno at Oshugbudu in Agatu local Government, my local government of origin today, 18-04-2021 which has claimed so many lives and destroyed properties yet to be quantified, is the Chief of all the calamities that have fallen us this year,” he said.

The level of casualties recorded during the incident was still sketchy as of the time of filing this report.