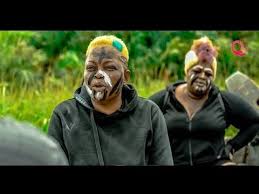 There is no doubt that Nigeria Nollywood has come to stay with heartbreaking moving making that can be compared to any in the world, the content might not be what some people might expect, but the financial raking side is really commendable.

In 2020, when the entire world was shot down due to the havoc caused  by the novel COVID-19, some moving producer in Nigeria still find time to do what is expected of them, one of such actress turned producer, is Funke Akindele, she is one producer right now that is making the Nollywood industry a viable one.

With the release of her latest film on cinemas, Omo Ghetto, which was premiere 25 December 2020, it has become talk of town in all sectors.

Omo Ghetto came like a tsunami that swept all the box office, this particular film had all the trapping of some-thing special, from the very day it was premiere to its current tour of the cinemas.

In box office, by 1st of January, the firm had amassed over N180 million, when juxtaposed with the first week it was released, in 25th December 2020 when the film made a whopping N89 million .Next in line to Omo Ghetto is Fate of Alakada which came a distant second raking in N113 million and it was released a long two months before Funke Akindele’s money spinner. On the third spot is Rattlesnake which garnered over N69.

In fourth, fifth and sixth places are Quam’s Money, Dear Affy and Who’s The Boss with financial fortunes of N59M, N39M and N38 million respectively. Completing the Top Ten list according to statistics made available by Film One Entertainment are Legend of Inikpi with N29M at seventh; Nneka The Pretty Serpent N28M at eighth ; Introducing The Kujus with over N25M at ninth and Small Chops at tenth with N25M.

The Nigeria film maker, has what it takes to producer films that can stand shoulder to shoulder in the international stage, all that is needed is the enabling environment, from the relevant authorities for the sector to strive.