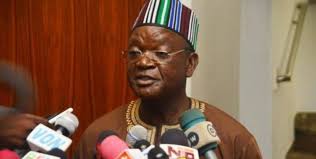 The Benue State Governor, Samuel Ortom has demanded the release of N100 billion to his State for the establishment of ranching arguing that if the Federal Government could approve N6.5 billion to Katsina State for that same purpose his State deserves much more with an apology.

“It is hypocrisy for the federal government to approve money for ranching in a state and leave others out. And in fact, the Governor of the (Katsina) state in his remark said N5billion had already been remitted to their coffers. So, I begin to wonder, where are we headed.”

Ortom who noted that the All Progressives Congress (APC) led federal government has failed the country woefully said Nigerians under the APC are suffering and smiling.

“Tell me where we are economically, security-wise, politically where is Nigeria? So, when I hear people say that they are decamping from one political party to the APC, one wonders what they are going there to do.

A government that has failed completely in all spheres of life.

“Even you the journalists who are talking to me, can you, in all honesty, say this government of APC and the presidency have impacted your lives? So we must not be afraid to speak out,” Ortom added.