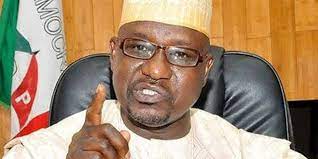 Sources told our correspondent that Gulak who was a former aide to ex-President Goodluck Jonathan was heading to the airport when the assailants attacked him and shot him on the spot.

Gulak was trailed from his hotel room to the spot where he was killed.

“He left without any security escorts and while the cab driver took an irregular route to the airport, six armed bandits who rode in a Toyota Sienna intercepted, identified, and shot at Ahmed Gulak,” the police spokesman said in a statement.

The Commissioner of Police in the southeast state Abutu Yaro has directed “a discreet investigation into the matter as Tactical and Special forces have been deployed to cordon the area and arrest perpetrators.”

He was the chairman of the APC committee that conducted the primaries for the Imo governorship election.

In January 2016, Gulak, a former member of the Peoples Democratic Party (PDP) had declared himself as the national chairman of the party following the crises that rocked the PDP.

Two years later, he left the then-ruling PDP for the APC. He cited  “impunity” and “injustice”  in the PDP for his decision.

In April 2014, Gulak was sacked as Jonathan’s special adviser on political matters but the former Nigerian leader did not give any reason for his dismissal.

He resigned – some days later – as the national coordinator of the Goodluck Support Group (GSG).