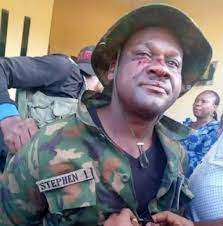 A soldier attached to 6 Battalion in Akwa Ibom State has been arrested for allegedly killing one Enobong Jimmy, who offered him a ride from Port Hacourt in Rivers State to Ikot Abasi in Akwa Ibom.

The soldier simply identified as Stephen was said to have attacked and killed Jimmy before they got to their destination.

After  committing the heinous act, he reportedly dumped the corpse of the deceased by the roadside and took over his vehicle.

However the Police later found the corpse, which they deposited at a mortuary, and recovered the stolen vehicle at Ukanafun Local Government Area of Akwa Ibom.

Our correspondent gathered that the tracker in the vehicle made it possible for the police to trace the location of the car.

The soldier, who was locked up by the police, was said to have been later released to the military authorities ahead of a court martial.

The family members of the deceased have called on the Federal Government and Nigerian Army to ensure that justice is served.

They also appealed to Nigerians to join voices with them to ensure that the murder of their son is not swept under the carpet.

Speaking with our correspondent in Uyo, Akwa Ibom State capital, on Wednesday, a brother of the deceased, Mr Idorenyin Ikpongeyen, said he was afraid that if the case was not followed to the later, it would deter people from offering assistance to strangers.

He stated that the deceased was on his way to visit his family members in Mkpat Enin Local Government before he was killed, adding that he left behind a very young family as his last child is just a year old.

“It is very painful that we had to lose our brother to the hands of an ungodly Nigerian military personnel, all because he wanted to steal or reap from where he did  not sow.

“I beg the Federal Government, the Nigerian Army and the general public to help fight this fight for us. I beg the Nigeria Government to bring justice to the one who murdered my brother, leaving his two kids and a wife behind,” he said.

When the Assistant Director, Public Relations Officer of the Nigerian Army, 2 Bridgade, Akwa Ibom State was contacted for details of the incident, he confirmed that the suspect is a soldier.

He said they were awaiting directives from Abuja before a press statement on the matter will be issued.

“He is a soldier. We have written a statement and forwarded it to Abuja for further directive. So I await the statement from above,” he said.

He left behind a wife and two young daughters, aged eight and one.

(Will this stops you from given a ride, and if your guess is as good as mine please give us your opinion on the comment box for others to learn from)