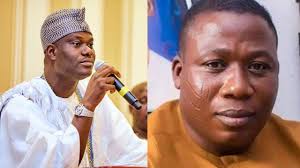 The Yoruba activist Sunday igboho, early this week lambasted the Ooni of Ife Adeyeye Ogunwusi Ojaja II, when he called him names. But in a swift reaction, the monarch has come out to say he has forgiven him.

According to media aide to Ooni, moses Olafare, made this known on Thursday, he said the monarch is standing solidly behind Igboho’s move to raid the region of criminal herdsmen.

The media aide said it is not in the style of the monarch to make statement that will threatened the unity and peace of the country, especially as it affect the descendants of Oduduwa worldwide.

Recently, Sunday Igboho accused the monarch of disappointing the Yoruba race when he visited the president in the villa, over the herders crisis ravaging the region.

In a press statement after the monarch met with the president, he advised Sunday Igboho not to take laws into his hand, and advise him to allow the right authority to deal with the matter according to the law.

This statement did not go down well with the activist who called the monarch unprintable names in a virtual meeting he held with some concerned Yoruba descends worldwide.

Sunday Igboho later apologised, to the monarch on a video were he said he had earlier put a call to Ooni and he has asked for forgiveness.

However, the media aide to the monarch, Olafare, said that the Ooni is not worried by the abusive and derogatory words against him by Sunday, he said Sunday Igboho is a son to the monarch and his apology has been accepted.

He said, “Sunday Igboho still remains a son to the Ooni. Baba has already forgiven him because he had tendered an apology via a video clip he produced via social media yesterday evening.