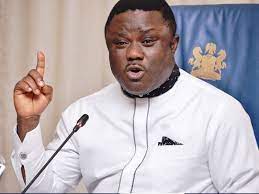 Governor Ben Ayade of Cross River State has explained that his defection to the All Progressives Congress (APC) is due to President Muhammadu Buhari’s leadership qualities, saying he wants to help the 78-year-old in dealing with the challenges facing the country.

Ayade moved to the APC from the Peoples Democratic Party (PDP) on Thursday after months of speculations but explained, however, that he had no issue with his former party.

“As to whether there are issues in the PDP, no. The party stood by me all through the way,” the governor said during his appearance on Channels Television’s Politics Today on Thursday.

“In any other legal issue that I have had, PDP had stood with me. PDP gave me the opportunity to be a senator; PDP gave me the opportunity to be governor. I would never have any time to pull down PDP. I have integrity, character, and honour. My politics have ethics. My decision to join APC is to join the President to reduce the tension in the country.”

Nigeria has in recent times grappled with myriads of security challenges and the governor is calling on citizens to rally around the country’s leader to help in combating these issues which he says make him unhappy.