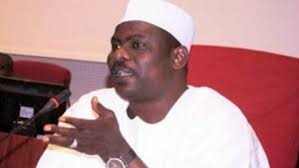 The senator representing Borno south senatorial district of the war ravaged Borno state, senator Ali Ndume, has lamented the inability of the federal government project to be completion in the north east, he said the insecurity was hampering the various projects the government has initiated in that parts of the country.

He stated this in Maiduguri the state capital when he was addressing news men, on Monday. He said the construction and the rehabilitation of some major roads in the state, which was approved my Buhari lead administration has been abandon due to insecurity in the state, he also named some road project that has been awarded in north east.

He said the Dikwa Marte-Monguno Road which was approved for N60.27bn and the Numan road that linked Borno and Adamawa which the federal government approved for N15.527bn, the third which is Gombi-Biu linking Adamawa and Borno also approved for N7.643bn.

The government has also approved the reconstruction and rehabilitation of the dilapidated Bui-Azare-Shaffa=Garkida federal highway linking Gombi Local Government Area of Adamawa , he said the workers were made to abandon the work due to terrorist activities.

According to the lawmaker, he said Damaturu-Maiduguri has been awarded, but, the work has stopped due to insecurity in the region. He said road users and passenger do not pass through the road regularly due to the activities of Boko Haram in the state.

He asked the people to always cooperate with the security agent in other to overcome the insecurity that has bedeviled the area for more than a decade now, he also used the opportunity to call on the government to intensify effort in brining a lasting solution to the insecurity problem in the area