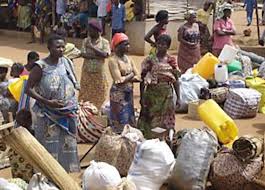 Following a motion sponsored by the senator representing Ogun west, senator Tolu Odebiyi, on Wednesday, the senate has asked the president Buhari to make urgent moves to repatriate, Nigerians in Benin Republic.

Some resident of Ogun state who are seeking refuge in neighboring country Benin republic after attacks on their communities by suspected herdsmen.

The senator when presenting his motion, said, Ogun state could not be left allow with the task of resetting the displaced residents, hence, the federal Government should be advice to come inn.

“Many communities, namely (but not limited to) Asa, Oho Agbooro, Moro, Ibeku and Agbon Ojodu, were affected by the criminal activities of these suspected herdsmen,” he said.

“The countless attacks by these criminal elements have forced many residents of these areas have deserted and relocated to a refugee camp in the Pobe area of Benin Republic in search of safety, with many of them forced to live in very unfavourable conditions in the refugee camps.

“The state government alone, cannot be left with the onerous task of resettling these displaced citizens, hence, the need for support from the federal government to effectively return the affected citizens back to their various communities.

“If the Benin Republic that is a neighbour to Nigeria could accommodate Nigerians, give them food and set up a refugee camp for them, Nigeria needs to positively step up on how we treat our citizens who are victims of an internally induced crisis.”

The senator’s  on it part, called on various relevant agencies, like the National Emergency Management Agency (NEMA), the humanitarian affairs ministry, and the Border Communities Development Agency (BCDA) to urgently provide relief for the affected persons, to alleviate their suffering, pending their planed return.

The senate president Ahmed Lawan. Put the motion into vote, and it was adopted through a voice vote,