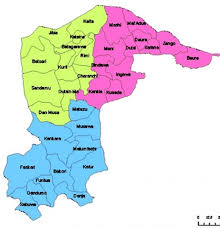 The fight against kidnapping and criminalities in Nigeria is far from over, the North East and North West is worst affected for banditry and terrorism, it was reported again that 37 kidnap victims in Katsina state were rescued  from bandits  on Friday night and handed over to the state government.

One of the victims who were abducted in Safana local government area of the state, revealed that she was abducted nine days after her wedding. She gave her name as Farida Sani.

In Farida Sani word, “When the Bandits attacked our town about two weeks ago, they met me inside the bedroom. Upon their arrival, they first abducted my companion (husband) and lastly visited my room where I was lying on the ground and woke me up. They then took us to their den. We spent 15 days there”.

“During our stay, they were beating my husband and his other male counterparts but not me. The accommodation was not a room but an open place more of grasses and plants”.

The special adviser to the governor on security, Mallam Ibrahim Katsina, revealed to the public that over 141 kidnap victims has been rescued since the governor Aminu Masari lead government embarked on community-based initiative involving security operatives and the Fulani community leader in the state.

He reiterated Governor Aminu Masari’s commitment to rehabilitate and integrate the rescued victims which would be the next stage after which they would be reintegrated with their communities.

The victims health and psychological status was carried out by the medical doctors to examine their state of health, and after that, the state government will give them some palliatives to start life in better way, said the special adviser.

The victims were later address by the secretary to the government, Dr Mustapha Inuwa who addressed the rescued victims on behalf of the state Governor. He urged them to see their experience as an act of God and be prayerful, as he admonished them to be law abiding and keep faith in Governor Aminu’s administration to raid the state from all criminality .