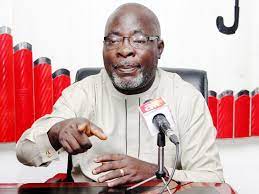 The Peoples Democratic Party, PDP, has reacted to the claim by the Presidency that past political, religious leaders were plotting to forcefully remove President Muhammadu Buhari from office.

The Presidency had in a statement made available to journalists by Femi Adesina, a Presidential Spokesman, said the individuals were “convening some sort of conference, where a vote of no confidence would be passed on the president, thus throwing the land into further turmoil.”

Reacting, PDP in a statement by Kola Ologbondiyan, its National Publicity Secretary, on Tuesday, said that the Buhari administration and the ruling All Progressives Congress, APC, should live up to the responsibilities of office instead of engaging in frivolous allegations against Nigerians.

According to the party, the Presidency’s statement was an attempt by the APC to heighten political tension in Nigeria ahead of the 2023 election.

The statement which was titled, ‘You’re Haunted By Your Own Shadows, PDP Tells Buhari Presidency, APC’, reads in part, “Perhaps, the Presidency has forgotten that in 1983, Brig. Muhammadu Buhari, as he was then known, led a military coup to truncate a democratically elected government, thereby causing our nation a huge drawback on democratic governance.

“Also, in 2015, the APC, which was hurriedly formulated, made itself available as a vehicle of brigandage to disrupt our political process by beguiling Nigerians and taking power through violence, propaganda and falsehood.

“Even in 2019, Nigerians will be quick to remember how the APC imported bandits, vandals and thugs from neighbouring countries, as political mercenaries, to unleash violence, disrupt our voting processes and muscle itself to power.

“The PDP, therefore, counsels the Buhari Presidency and the APC to look inwards as all fingers toward any possible plots to upturn our democracy point to them.