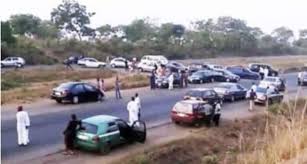 Senator Shehu Sani, a former Kaduna lawmaker has raised alarm over the alleged abduction of people along the Kaduna-Abuja road.

The former lawmaker who took to his Twitter account on Friday evening to raise the alarm said the bandits blocked the expressway.

He said many people were making a fast U-turn in the face of the gunshots.

“I have just got a call that Bandits have blocked the Kaduna Abuja road in between Jere and Katari village in this broad daylight.

“Scores of people were kidnapped while many have made a fast u-turned in the face of gunshots,” he wrote.

He further warned citizens to avoid taking that route until the situation is brought under control.