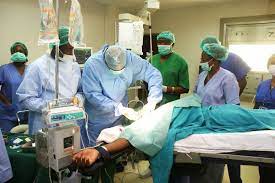 All surgical operations in University College Hospital (UCH) Ibadan have been suspended, the medical doctor decided to go on the suspension of surgeries, due to lack of water supply to the hospital.

It was discovered on Wednesday that the teaching hospital has been experiencing water scarcity in the last few days.

It was learnt that at the UCH, hundreds of patients on admission and their relatives have had to go through stress for the lack of potable water in the health facility.

Some of the patients who are currently on admission in the hospital said they buy bags of satchel water to bathe and flush the toilets in the hospital.

A relative of one of the patients told our correspondence on Wednesday that doctors in the hospital told his family member that they have suspended surgical operations in the hospital as a result of scarcity of water.

He said, “Someone who has been on admission at UCH for days just called me now that there has not been water supply to UCH for four days now.

“Patients buy bags of satchel water to bath and flush toilet. He is on admission for surgery and because of the water situation, doctors told him no surgery for now.”

One of the patients in the hospital said on Wednesday that he was admitted on Tuesday but there is no water to bath or flush.

He said, “I was admitted to the haematology daycare unit in UCH yesterday. There was no water to even flush the toilet.”

The Public Relations Officer of the hospital, Toye Akinrinlola when contacted said that the water scarcity was caused by ongoing renovation in the hospital.

He added that the renovation is expected to be completed in the next three weeks.

“When you visited UCH what did you observe? You will observe that there is a massive renovation ongoing. We are replacing the sewage system, that is why we have to shut down some facilities.

“When such renovation is ongoing, we have to shut down five blocks. We do not admit patients except for a few critical cases.

“The renovation is to be completed in three weeks. The issue of water scarcity that came up this morning is very strange to me. We have shut down our water plant and we cannot bring water from outside because we have our own water treatment plant. The best is for our patients to be patient with us.”

Recall, that the suspension of surgical operations in UCH occasioned by water scarcity is coming few hours after President Muhamadu Buhari left Nigeria for a medical checkup in London.