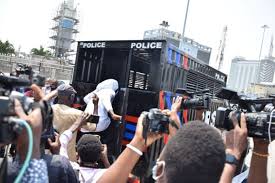 Nigeria has been taken back to military era, this is according to The Corporate Accountability and Public Participation Africa (CAPPA), a non-governmental organization.

The statement was as result of the molestation of #OccupyLekkiTollGate protesters arrested by security operatives.

Protesters assembled at the Lekki tollgate on Saturday to demonstrate against the reopening approval given to Lekki Concession Company (LCC), to resume operation at the tollgate.

Activities at the tollgate has been put on hold since shooting incident involving #EndSARS protesters on October 20, 2020.

The security agent, on Saturday arrested some demonstrators who were in the tollgate to pretest the reopening order, and were taking away

However, on Saturday, demonstrators who stormed the tollgate were arrested and taken away in a van popularly called “Black Maria”.

Reacting, in a statement signed by Philip Jakpor, its director of programmes, CAPPA said it is shameful that the police have remained “docile” with bandits, but could come out with force against unarmed protesters.

“We are surprised that our security agencies that have remained largely docile in the face of rampaging bandits across the country, came out in full force against those they have sworn to protect. It is shameful and totally reprehensible,” the statement reads.

“This sad and shameful incident reopens the wounds of the 20 October 2020 Lekki shootings, which was allegedly perpetrated by soldiers and policemen.

“Some passers-by are also said to have been arrested by the men of the Nigerian police who turned up in full force at the tollgate.

“Video footage circulating on social media shows some of the arrested protesters crammed in a Black Maria and being derided by the police in scenes reminiscent of the military era when Nigerians’ right to converge and free speech was trampled underfoot.

“We are shell-shocked that in the 21st century, the Nigerian police is still dehumanising Nigerian citizens by forcefully stopping their legitimate right to converge and protest and clamping them like rabid animals into the dingy Black Maria.”

On his part, Akinbode Oluwafemi, CAPPA’s executive director, said the arrest of the protesters have exposed the demonstrators to COVID-19, considering how they were transported.

“Through their repressive tactics, the police have not only violated the rights of these citizens to protest, but also exposed them to the coronavirus by clamping them into the poorly-ventilated Black Maria. This is totally unacceptable and unimaginable,” he said.

The protesters were later arraigned on charges bordering on flouting the COVID-19 protocol on public gatherings.

They were granted bail in the sum of N100,000 each, with sureties in like sum.