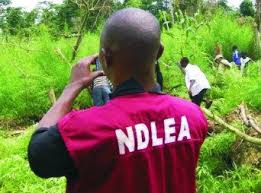 The Kaduna State Command of the National Drug Law Enforcement Agency (NDLEA) has seized a total of 1,721 kilograms of Cannabis Sativa from illegal drug dealers in various parts of Kaduna State.

The items were seized between January to May 2021.

The command also arrested 89 suspects for illicit drug-related offences across the state.

The state NDLEA commander, Uche Samuel while addressing journalists in Kaduna on Tuesday said some of the seizures and arrests were made in the Kudenda industrial layout in Kaduna South Local Government and Kasunwan  Magani in Kajuru Local Government respectively.

Displaying the seized illicit substances to reporters, the NDLEA commander,  warned drug peddlers to desist from illegal activities or be ready to face the law, stating that the command is committed to rid Kaduna state off drug peddlers.

He explained that since the beginning of this month, four suspects were arrested in possession of 328.1kg of Cannabis Sativa in Kudenda and Kasunwan Magani  while the command successfully convicted eight persons to various jail terms for drug-related offences.