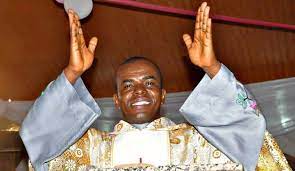 A Nigerian Catholic priest has defended his controversial remarks asking the country’s President Muhammadu Buhari to resign over rising insecurity in the country.

Reverend Father Ejike Mbaka also told off a government official who termed his remarks as “ungodly” saying he was only saying the truth.

Yekini Nabena, the deputy national publicity secretary of the ruling party All Progressives Congress (APC) had suggested that the priest should obey and honour the authorities – as Jesus Christ did.

He said there was a “lot to tell” to the church headquarters in Vatican about what the priest was doing.

However the priest dismissed the party official: “If the Pope knows I am speaking against bad governance, he will clap for me. So please, quickly go to Rome,” Mbaka said at a gathering on Sunday.

The priest has in the past expressed his support for the president – and Mr Buhari has previously shared a picture of them together at the state house in the capital Abuja.

On Friday the presidential spokesman, Garba Shehu, questioned the priest’s “u-turn”, and alleged that the criticism was because he failed to get contracts from the government.

The spokesman made his claims in a post on Twitter – which the priest has termed as “laughable” and “childish”.

He however admitted meeting the president for contracts meant for “securing the country”.

“When they talked about giving Father Mbaka contracts, I don’t want to talk about that, I was laughing. It is a laughable, childish accusation. Whoever is saying that is a shame to himself and shame to the people he is representing,” Mbaka had told his congregation on Sunday.

“The three men he talked about, I am not here to defend anybody’s stupid allegation, but God used that man to tell the world that Buhari’s government is not giving me money.

“… These are the three men that we brought that will handle insecurity for the country; they had the gadgets. The white people had the facilities. That was during the first administration.

“They said they will help them in conquering insecurity. They had the platform to end insecurity in this country under one month; under Abba Kyari. I just handed them over to the government people. They denied them of these.

“I don’t even know these people. They just came to Enugu and said, can I help them reach the government, that the level of insecurity in this country and how Nigeria has been shipping their oil out, refining and bringing them back, that we are losing.

“They said they have all it takes to revive the oil apparatus in the country and get the whole youths employed and the issue of insecurity will die. These are the three people they rejected their offer, since they know how to talk.”