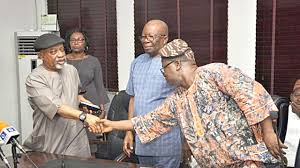 It looks as if the fight between the federal government and The Academic Staff Union of Universities might be far from over,  there is indications  that it might  resume its suspended strike in February  if the Federal Government failed to implement agreements it signed with the lecturers, on Wednesday.

This disclosure was made to the public by the union’s  president prof riodun ogunyemi, in an interview in Lagos, to the journalist.  While shedding more light to the decision of the unior to suspend it more that nine months strike.

But while ASUU ended its industrial action on Wednesday, non-academic unions in universities threatened to go on strike over N40bn earned  allowances government  promised to release to all unions.

They described the sharing formula for the money as unfair.

Recall that ASUU had on March 23 begun a nationwide strike over the Federal Government’s insistence that all its employees must register for the Integrated Personnel and Payroll Information System.

Although government argued that the IPPIS was meant to eliminate fraud, the union stated that it should not be applicable to universities on the grounds that it violated their autonomy.

In the alternative, ASUU developed the University Transparency and Accountability Solution, which it said would meet the peculiarities of universities.

Until Tuesday’s meeting between the two sides, they had disagreed over UTAS, which government said would only be adopted if it tallied with the IPPIS.

Besides its opposition to the IPPIS, other demands of ASUU are setting up of visitation panels for universities, payment of earned academic allowances and revitalisation of infrastructure in the universities.

Ogunyemi,  in the interview with The journalist on Wednesday evening, said if the government reneged on its promises, members of the union would not hesitate to withdraw their services.

Earlier at  a press conference in Abuja, he  said the union would as from 12am on Thursday Dec. 2020 suspend its strike.

The decision to suspend the strike, according to Ogunyemi, was unanimously reached by the National Executive Committee of the union, after considering reports from the national secretariat and various branches.

While assuring  Nigerians that ASUU would fulfill its own part of the agreements it reached with government, Ogunyemi warned that the union would not hesitate to resume its suspended strike should government fail to reciprocate the gesture.

According to him, ASUU is willing to return to classrooms and laboratories to rekindle the aspirations of its members to encourage their students to excel.

Ogunyemi further urged parents to take prime interest in their children’s welfare, learning, better funding, better laboratories, and free development to enable them to compete with their counterparts  globally.

He said, “After diligent and careful appraisal of the various reports, especially the agreements reached by ASUU with the Federal Government of Nigeria on December 22, 2020, NEC resolved as follows:

“To accept the agreements reached between ASUU and the Federal Government on December 22, 2020, to consciously and diligently monitor the implementation of the FGN-ASUU agreements of December 22,  2020 in all branches.

“To ensure that no ASUU member suffers any loss of deserved benefits as a result of participation in the strike, to pursue fervently FGN-ASUU agreements in 2009 and the MoA (memoranda of agreements) 2013.”

According to him, both sides also agreed that  the earned academic allowances should be backed by a law and the amendment of the Executive Bill in respect of the National Universities Commission (NUC) Act, 2004.

While shedding more light on ASUU’s insistence on the implementation of the 2009 agreements, Ogunyemi stated that the objectives of the agreements were found to have been made even more potent by the findings of the Federal Government Committee on the Needs Assessment of Nigerian Universities in 2012.

He stressed that the agreements when implemented would reverse the decay in the Nigerian university system and reposition it for greater responsibilities in national development;

Ogunyemi also stated that  the implementation of the agreement would reverse the brain drain in universities and  enhance the remuneration of academic staff.

According him, university lecturers would be freed from  “the encumbrances of a unified civil service wage structure.”

Later in an interview with The journalist on Wednesday evening, the president of ASUU said government made promises about the demands of the union.

He said government promised to release N30bn to the union before the end of the month for the revitalisation of universities.

He stated, “The Federal Government made promises about our demands and we have timelines attached to them. On  the demand for revitalisation,  they promised to give N30b before the end of this month.

“They promised earned academic allowances. On the visitation panel, they have told us part of the preparations. We talked about renegotiation that is going. We have had two meetings already and more meetings will continue in the New Year.”

He also said substantial progress had been made on UTAS, adding that the union was awaiting its final adoption after its verification by the  National Information Technology Development Agency.

Ogunyemi also said, “The withheld salaries are being released. So with that,  we believe that normalcy should return to our universities. We made it clear, if government reneges,  our members are ready to withdraw their services and we made that clear to government.