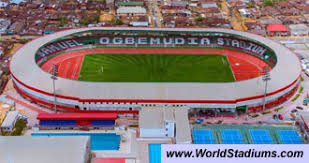 The Deputy Governor of Kwara State, Kayode Alabi in a tour of the refurbished Samuel Ogbemudia Stadium in Benin City the Edo state capital, said the stadium is the best in the country and he said further that the stadium has the capacity to host international tournament.

He was in company with the Edo state deputy Governor, Philip Shaibu, on Thursday.

He heap praises on the administration of Governor Godwin Obaseki for his laudable achievement the governor has achieved through sport, as a tool to empower the youth and the people of Edo state.

“I want to state categorically that Samuel Ogbemudia Stadium is the best stadium in Nigeria. I have gone around the stadium from the tennis, badminton and squash courts, to the gymnastics hall and swimming pool. All I can say is that Edo State Government has invested hugely in the sporting sector.

“With the facilities on ground, Edo can host AFCON matches, African Games and the Olympics events. Governor Godwin Obaseki is doing well in the area of engaging the youths through sports and, I know in the nearest future, the state will become a force to reckon with in the sports industry.”