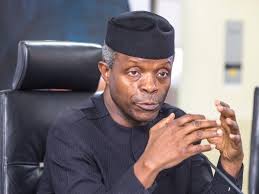 Vice President Yemi Osinbajo says there is a lot for Nigerian politicians to learn from the successful transfer of leadership in the Christ Apostolic Church (CAC).

He made the disclosure on Saturday in Ibadan during the inauguration of the 8th president of Christ Apostolic Church (CAC) worldwide.

According to the News Agency of Nigeria (NAN) the inauguration of Pastor Samuel Oladele as the 8th president of the church was attended by representative of the vice president and some governors from the south west region.

Osinbajo, who was represented by Pastor Seyi Malomo, the Chaplain of Aso Rock Chapel, said: “When I attended your centenary celebration three years ago, I reminded us all that through the apostle, CAC, God has demonstrated that he did not need many to do His work.

“Neither did He need professors or men of race scholarship to propagate the gospel.

He said that the anointing of God in the church has made it such that the humblest of men, even the least educated of men and women can bring the good news on certain chains of captivity of the devil.

“The anointing can bring good news, delivering the oppressed from evil spirit, healing the sin and even raising the dead. Apostle Ayo Babalola, founder of the first general evangelist, released a testament to this fact.

“He says of evangelism and miraculous accomplishments are beyond incredible harvests of salvation of souls through this church in Nigeria and comparing world.

“Nigeria and the world have come to know through the Christ Apostolic Church that God’s supernatural power is real.

Today, as we inaugurate the 8th President, I have no doubt that God will pour again fresh anointing to empower the church to move higher, to move wider.

“And even faster in its core objectives of spreading the gospel, saving of souls, delivering the oppressed from the devil’s stronghold, healing the sin and raising the dead,’’ he said.

The vice president enjoined the church, its leadership and laity to support the new president.

“I therefore enjoined all the church, the leadership and the laity to support the new president, so that as one body, the CAC will march forward, grow stronger and move faster as a united force to propagate the much-needed gospel for the disciple of these mini generation.”

Gov. Rotimi Akeredolu of Ondo State appreciated the new president for making it a priority to end the crisis in CAC, calling on all to support him in this new mission.

“We are happy today to witness the inauguration of another president of this church. In your speech, you said your priority is to ensure the crisis in the CAC ends. This is a great priority from you and I urge all to support you, ‘’ he said.

The governor said that it was important to return to the bible to remain spiritually alive, saying it is the only way to enjoin the favours of God.

Gov. Seyi Makinde of Oyo State lauded the rancour-free transition process which ushered in the new president of CAC, praying that the new leadership bring good tidings to the church, Oyo State and Nigeria.

The governor, who said that the nation was at a cross-road due to insecurity, enjoined Nigerians to eschew all divisionary tendencies.

The event was attended by Dr Charles Akinola, who represented Gov. Gboyega Oyetola of Osun State, traditional rulers, prominent clerics and hosts of other invited guests.