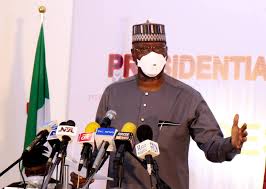 In a bid to contain the spread of COVID-19 in Nigeria, the Federal Government has secured the Oxford AstraZeneca vaccine, according to the Secretary to the Government of the Federation who also doubled as the chairman of the Presidential Task Force on COVID-19, Boss Mustapha.

In his voice massage, Boss Mustapha said “I can assure you that the vaccines are coming and they are coming very quickly barring any change in the delivery plan that has been released to us by UNICEF.

“We believe that our vaccines should depart India on the 1st of March, 2021 at 10:30pm and arrive Abuja on 2nd of March 2021 by 11:10 am. And we are making preparations for that. We are supposed to have 16 million in the first quarter from the COVAX facility, and expecting that by the time they supply all the range, we are expecting that they would supply about 84 million doses of the COVAX facility, which is free of charge and is supposed to cover at least 20 percent of the Nigerian population.”

The SGF further said that the government has also reached agreement to secure Johnson and Johnson vaccines, he said the AstraZeneca brand of vaccine has a good rage in terms of storage, which he said it can be stored in +2 to +8 Degree Celsius, and also in cool chain facilities which are available in all the local government and wards in the country.

He praises the frontline workers for their services and their dedications in combating the coronavirus pandemic.