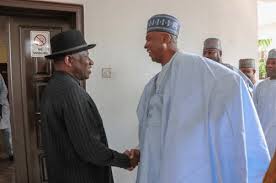 The People Democratic Party has reached out to former president Dr. Goodluck jonathan at his maitama Abuja resident, the visit was made by reconciliation committee of the party  lead by the former Senate President Bukola Saraki.

The reconciliation committee was set up after the 2019 general election, the main aims is to reconcile aggrieved members and also to woo new members and those that left the party,

The purpose of the meeting was not known, but it may be unconnected to the 2023 general elections. The meeting was held behind closed door.

Recalled that the people Democratic Party recently lost some prominent members to the ruling political party. Hence they are taking all measure to reconcile their aggrieved members.