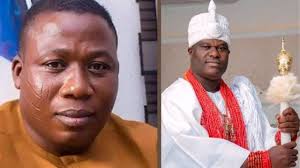 Sunday Adeyemo, a Yoruba freedom fighter, in a new video on Wednesday evening, begged the Ooni of Ife, Oba Adeyeye Ogunwusi for forgiveness.

He was reported earlier of calling the monarch unprintable names in a virtual meeting he had with some concerned citizens, were he accused the Ooni of betraying the Yoruba race.

Sunday Adeyemo, says, the monarch visit to the president was not for the interest of the region, rather, he went there to collect dollars, a claim he later regretted in the video.

Sunday Adeyemo, has threatened to liberate the Yoruba race from killer Fulani herdsmen, he came under heavy criticism for calling the revered monarch names that is unbefitting.

He said, he has spoken with the monarch on phone and had begged him for forgiveness

“I have called our father, the Ooni of Ife and I have apologised to him. When I said those things, I was carried away by my emotions. The killing of my people by Fulani herdsmen and the way our fathers in Yoruba land are handling the issue is giving me great concern.

“I am a Yoruba man and I know it is not in our culture to insult the elders. I have called the Kabiyesi and I have apologised to him. You can call him to confirm.

“Once again, I want to beg our royal father to forgive me. It was a slip of tongue,” Sunday Igboho said.