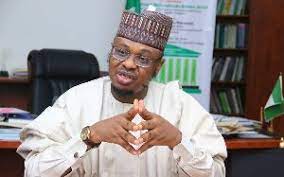 Indications that the House of Representatives may formally present, debate and call for the suspension or outright sack of the Minister for Communication and Digital Economy, Isa Pantami via a motion became more visible on Sunday.

This is as a member of the House, Hon. Ben Rollands Igbakpa, representing the Ethiope Federal Constituency of Delta State stated that entrusting Pantami with the sensitive bio-data of Nigerians was unsafe.

Pantami is currently embattled for showing sympathy for insurgents in a series of utterances that had provoked thoughts and attracted widespread condemnations from Nigerians even though the Minister has since shown remorse.

It will be recalled that the Minority Leader of the House, Hon. Ndudi Elumelu had through a Point of Privilege raised the matter at the House plenary, Wednesday last week.

But his Order which was conventionally not debatable was however “noted” by Speaker Femi Gbajabiamila.

Elumelu had said: “Mr Speaker, my privilege border on one of the serving ministers called Sheikh Ali Isa Ibrahim Pantami. He is the Honourable Minister for Communication and Digital Economy of the federal republic. And the portfolio that he currently occupies give him the free latitude to administer, coordinate and manage flow of sensitive information within and outside the shores of Nigeria.

“And Mr. Speaker, there have been insinuations that he has direct links and personally subscribes to the extreme Islamic believe of Al-Queda, Taliban and Boko Haram sects. Evidence compelling the cyber space lays strong credence to a relationship and existing mutual collaboration between him and the deceased Yemen terrorist. Recently, Mr Speaker, while the minister was answering questions during his daily Ramandan lecture, a few days back, he owned up that he took extreme positions in support of the brutal exploits of Al-Queda and the Taliban out of ignorance, claiming that he was young when he did that , but now he is matured.

“Mr Speaker, my worry is that I am a serving member of this chamber and in the last few days, I have been inudated with calls from my constituents claiming that if it is right, that this House that this House they have always seen talk about insecurity can sit down on this floor and tolerate the fact that a serving minister where there are allegations of him being a member of Al-Queda and Boko Haram, owned up and said that he did whatever he did at that time, because at that time he was youth and he is still serving in this administration.

“Mr Speaker, I feel it will be out of place for me to sit here and allow this chamber and not to speak about it and totally call for his resignation or suspension”.

Ruling on the matter, Gbajabiamila who presided over the plenary faulted Elumelu for raising a point of privilege without showing how his privileges were breached.

Usually, such issues were presented as a formal motion to be debated but Elumelu came under point of personal privilege, prompting a technicality to it.

“I think you came under the wrong order. But your point of order is well noted. As you know, under privilege we don’t debate such issues, if it comes under privilege. Thank you”, Gbajabiamila said

But so far, the matter had generated some furore between the House Spokesman, Hon. Ben Kalu who in a statement said the House will hear the call when properly presented and the minority caucus spokesman, Hon. Francis Agbo who in another statement also insisted that the matter was debatable.

Speaking to Journalists in Abuja on the matter, the Deputy Chairman, House Committee on Communication, Unyime Idem from Cross River State said that the House was awaiting a formal motion to take a resolution on the issue.

He said: “(On Thursday), somebody raised the issue that this is a serious matter and they will like to get the view of the House because the one raised the other day was a matter of privilege that came from a member, not a resolution of the House. So, on that note, the House decided that anybody is free to sponsor that motion so that we can debate the matter.

“So, we are waiting for a motion to come. Somebody stood up on Thursday to request from the Speaker to grant that a motion is sponsored so that the House of Representatives members can have a say on that matter. So, until that motion is brought to the floor, we can’t just be talking outside the opinion of the House. You can wait until the motion comes to the House. That’s when you will know our stand on that.”