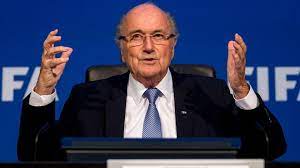 Former president of FIFA, Sepp Blatter has been handed a new six year ban from football related activities for breaching the association’s Code of Ethics. He is presently serving a suspension that was handed over to him in 2015.

The current suspension was as a result of conflict of interest and dereliction of duty charges. The current ban is set to expire by October. The former president however has been penelised for a separate offence he was found wanting.

“The investigations into Messrs Blatter and Valcke covered various charges, in particular concerning bonus payments in relation to FIFA competitions that were paid to top FIFA management officials, various amendments and extensions of employment contracts, as well as reimbursement by FIFA of private legal costs in the case of Mr Valcke,” a statement read.

The pair have both been banned from football for a period of six years and eight months. In Blatter’s case, this suspension will begin when his current one expires in October. Each was also given a fine of 1,000,000 CHF, the equivalent to around £800,000.

The ruling is the latest in a long line of sanctions since the FIFA corruption scandal became public in 2015. Former UEFA president Michel Platini, long expected to be Blatter’s successor, is also currently banned from all football activity until 2023.