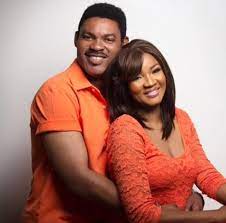 Omotola Jalade Ekeinde, is one of Nigeria’s greatest actresses of all times. She is a legend and well seasoned in the industry recently she sat with Media Personality, Chude, for a one-on-one interview were she gave her honest opinion and thoughts about being married, and all that the institution entailed.

Recently, she and her husband celebrated their 25th wedding anniversary, with over three hundred films, this woman has created a name for herself and has become an inspiration and role model for many people, both young and old. And the actress has now opened up on some of her experiences so far in marriage.

On being able to keep the love going for the past 25 years, she said ;

“He knows that I’m not with him because I love him all the time. I’m with him because God has given me a mandate to be by his side and vice versa so the time when I see him and I’m not so much in love with him, I report him to God. I’m like “Hey, what’s up now? Are you gonna make it come around?’”