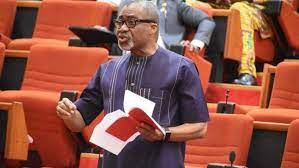 Abaribe in an interview on Arise TV on Thursday, condemned the arrest of innocent youths, especially young boys by security operatives in the South-East each time there is an attack on a security formation.

The senator stated that there is a need for security agencies to conduct an in-depth investigation, bring and try criminals involved in the acts in court.

He also insinuated that there are speculations that the attacks which are being done in quick succession in Igbo land were aimed at scuttling the proposal for an Igbo presidency.

“Civil engagement dictates that you investigate, apprehend and prosecute.

“We are happy that Nigerians are seeing that what is here is not an Igbo problem, but a criminal syndicate going around all parts of the county and the government needs to unravel this.

“If a criminal burns a police station, you do nothing and then go and arrest every villager that you see on the street; which is what is currently happening in the south-east, then you are not resolving the issue.

“What you’re letting everybody know is that it is us versus them, which is not a good way of building unity in the country.

“We have directed the inspector-general of police and other security agencies to conduct a thorough investigation not to just round up youths that you see, conduct extra-judicial killings and say you’ve resolved the issue.

“Suppose these attacks being done in quick succession in Igboland are meant to scuttle the proposal for an Igbo presidency — I hope you can also look at it from that perspective,” he said.

“All we are saying is, try to conduct a thorough investigation then we’ll know who is doing this, who their sponsors are and why they are doing it,” he said.