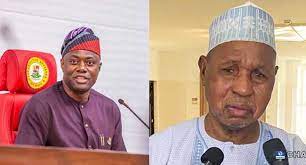 Local government administration got a landmark victory on Friday after the Supreme Court, in two separate judgments, declared that state governors have no power whatsoever to sack democratically elected local government chairmen and councillors.

The apex court said the 2015 dissolution of the 34 LGs in Katsina State by Governor Aminu Masari and the 2019 sack of the chairmen and councillors of the 33 LGs and 35 Local Council Development Areas in Oyo State by Governor Seyi Makinde were in breach of Section 7(1) of the 1999 Constitution.

The five-man panel was unanimous in the judgments.

The two judgments were on the appeals filed by sacked LG chairmen and councillors from both states.

The LG chairmen and councillors from the 34 LGs in Katsina, led by Abubakar Ibrahim Yantaba, were elected on the platform of the Peoples Democratic Party (PDP) but were sacked in 2015 by Masari of the All Progressives Congress (APC).

Those from the 33 local government areas (LGAs) and 35 local council development areas (LCDAs) in Oyo State, led by Ayodeji Abass-Aleshinloye, were elected under the banner of the APC but were sacked in 2019 by Makinde of the PDP.

Justice Adamu Jauro, who read the lead judgment in the appeal on Katsina, ruled that Masari acted ultra vires by sacking the appellants on allegation of financial misappropriation of councils’ funds.

Justice Jauro ordered the Katsina State Government to pay the appellants all their entitlements from the date of their illegal dissolution to the date they were supposed to lawfully vacate office.

In the case of Oyo State, Justice Ejembi Eko, in the lead judgment, said Makinde acted “invidiously and in contemptuous disregard of a High Court judgment” when he dissolved the democratically elected chairmen and councilors and appointed caretaker committees to replace them.

Justice Eko set aside the  judgment by the Court of Appeal in Ibadan, which validated Makinde’s action, noting that the lower court was wrong when it held that there was no reasonable cause of action in the suit the appellants filed to prevent their sack.

He noted that the three-year tenure of the sacked chairmen and councillors has since expired, but he proceeded to hold that they deserved to be compensated for their tenure that was “illegally truncated” on May 29, 2019.

Justice Eko ordered the Oyo State Government to pay the sacked chairmen and councillors their accrued salaries and allowances.

He ordered the Attorney-General of Oyo State to file an affidavit before August 7 this year confirming the payment of the salaries and allowances to the appellants.

He equally awarded a cost of N20 million in favour of the appellants.

Other members of the panel, Justices Kekere Ekun, Inyang Okoro, Ibrahim Saulawa and Adamu Jauro, agreed with the lead judgment.

The Attorney General of the Federation (AGF) and Minister of Justice, Abubakar Malami, had faulted Makinde’s decision in a January 14, 2020 letter.

In the letter marked HAGF/OYO/2020/Vol.1/1, which was addressed to the Oyo State Attorney General, Prof. Oyelowo Oyewo, Malami drew Makinde’s attention to past decisions of the Supreme Court on the issue and advised him to reverse the dissolution.

But rather than heed the AGF’s advice, Makinde queried Malami’s jurisdictional competence, claiming, among others, that the issue was internal to Oyo State.

Youth and Sports Development Minister, Sunday Dare, hailed the Supreme Court’s judgment as a landmark achievement in the present government’s efforts to deepen democracy at the grassroots.

Dare noted that with the “unsparing, unequivocal and unambiguous” judgment by the highest court in the land, it has now become crystal clear that no state government has the power to sack any elected council chairman or councillor, as correctly envisioned by President Muhammadu Buhari.

He commended the gallantry of the local government chairmen under the leadership of Prince Abass Ayodeji Alesinloye, stressing that their steadfastness and doggedness eventually paid off not only for themselves but for democracy as an institution at the grassroots.

The minister also praised their legal team led by Chief Niyi Akintola for a thorough and painstaking legal battle fought almost gratis for the sake of the APC.

Dare praised the  immediate past governor of the state, the late Senator Abiola Ajimobi, for his role in ensuring that due diligence was done in the conduct of the local government election and the profound leadership given to the local government executives in the pursuit of the case until his death.

The minister said he was particularly elated that the APC was able to “finally lay this issue bordering mainly on tyranny of power by state governors to rest.”

While congratulating the chairmen and councillors, Dare urged them to remain totally committed and loyal to the party in order to collectively win back Oyo State for APC.

For Chief Teslim Folarin, Chairman Senate Committee on Local Content, the Supreme Court’s judgment is a defining judgment and a triumph for Oyo State and the APC family in general.

Folarin, who represents Oyo Central in the Senate, said the Makinde administration in the state “committed a constitutional blunder by unjustifiably sacking the validly elected council chairmen and councillors. It is an anomaly for the governor to dissolve elected council officials, just like the Federal Government cannot dissolve state government.”

He urged APC stakeholders in Oyo State to remain united “with a view to dislodging the PDP government in the 2023 general elections.”

He said: “With this Supreme Court victory, the late former governor Abiola Ajimobi has been vindicated. May Allah forgive his shortcomings and grant him Aljana Fridauz. Amin.”

Chief Niyi Akintola (SAN), who led the legal team of ALGON in Oyo State, said: “This time around, the Supreme Court went further to drive home the point.

“What happened in Oyo State was not the first time. It had happened in several other states. The Supreme Court has given the judgment to correct the act of impunity perpetrated by some of our governors.

“This time around, the Supreme Court went further to set four different precedents that have never happened in the annals of Nigeria’s jurisprudence.”

Another legal practitioner, Mba Ukweni, said the decision of the Supreme Court has always been the position of the law.

His words: “Just as the President cannot remove the governors, governors cannot remove democratically elected chairmen and councillors. The local government is the third tier of government and not a department or a ministry under governors.

“That is why they have elected council chairmen and not appointed ones. Then they have their own legislative houses.

“In addition to that, they have executive structure. If an elected chairman has done anything that offends the constitution, they should take the proper procedure to ensure they bring him to book and not for the governor to wake up one morning and remove him as if he is removing one of his commissioners.

“They are not there at the whims and caprices of the governors.”

The Association of Local Governments of Nigeria (ALGON) in Oyo State on Friday described the Supreme Court judgment as victory for democracy.

Reacting to the Supreme Court judgment, Prince Ayodeji Abass-Aleshinloye, the former ALGON chairman in the state, said the pronouncement of the court would deepen democracy at the grassroots.

Abass-Aleshinloye told the News Agency of Nigeria (NAN) in a telephone interview that the apex court had in its judgment shown that justice could only be delayed but not denied.

“It is not about being in the office; it is for us to set the records straight. It is for us to fight for democracy to thrive at the grassroots,” he said.

The former ALGON chairman said the judgment had exposed Makinde’s impunity and mismanagement of the state’s resources.

He said: “Now that the judgment has been given, he has been asked to pay all our entitlements and other payments as ordered by the court.

“Our people can now see that Makinde had since been wasting the state’s resources through duplication of salaries.”

Former Governor of Oyo State and Chairman, Elders Advisory Council of the All Progressives Congress (APC), Oyo State, Chief Adebayo Alao-Akala, urged Governor Makinde to postpone the local government election scheduled for the third week of May, 2021 to a later date in order to protect the sanctity of the nation’s developing democracy.

Alao-Akala gave this advice while reacting to yesterday’s Supreme Court judgment that invalidated the sack of the duly elected 33 local government area chairmen in Oyo State.

He said: “Going on with the local government election as earlier scheduled will throw the state into another round of legal gymnastics.

“My advice to him is to sit down with the OYSIEC officials, look into the new development and do the needful, which is to shift the election date.

Fortunately, the Oyo State Independent Electoral Commission chairman is a learned fellow. He knows what the law calls disenfranchisement, he knows what the constitution says about holding elections and he knows the consequences of holding a one-sided election.

“Apart from that, the governor and the OYSIEC chairman have their names to protect.

“This is an opportunity for Engr. Seyi Makinde to correct his past mistakes.

“He should not commit another blunder by going on with that election which hundred per cent certain will be faulted again by the judiciary.”

While commending the Supreme Court judgment for guarding against the unguarded disregard for the sanctity of the constitution, Alao-Akala urged the judicial arm of government to find possible means of fast-tracking time bound litigations that can disenfranchise litigants of their legal rights as is the case of Oyo State ALGON where the final judgment is delivered few days to the official end of the tenure of office of the l