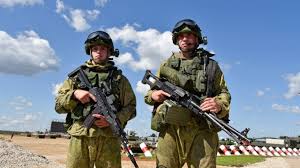 Russia will on Friday begin returning troops to permanent bases inside the country, pulling them back from near the border with Ukraine.

Thursday’s announcement comes after weeks of tensions between Moscow, Kyiv and the latter’s Western allies over a major Russian military build-up near its western border with Ukraine and in annexed Crimea, which reportedly involved tens of thousands of troops.

Russia has argued that the build-up was defensive, while Ukraine – backed by Germany and other Western powers – has accused Moscow of attempting to provoke hostilities.

“I believe the objectives of the snap inspection have been fully achieved. The troops have demonstrated their ability to provide a credible defence for the country,” RIA quoted Russian Defence Minister Sergei Shoigu as saying.

“In this regard, I have decided to complete the inspections in the southern and western military districts,” he added.

The deployments took place against the backdrop of renewed clashes in Ukraine’s conflict-stricken eastern regions of Donetsk and Luhansk, where government forces have battled Russian-backed separatist forces since the rebels seized a swath of territory there in April 2014.

The Russian military has not publicly declared the number of additional troops that it has moved, but the European Union’s top diplomat Josep Borrell said after EU foreign ministers were briefed by Ukraine’s foreign minister that the number was higher than 100,000.

NATO and the United States – the leading member of the transatlantic security alliance – have said that the build-up was Russia’s largest since March 2014, when Moscow seized Crimea from Kyiv, and called for the forces to be pulled back.

Moscow has repeatedly rejected Ukrainian and Western concerns about the build-up, maintaining that it is free to deploy its forces anywhere on Russian territory.

The Kremlin has also routinely denied playing any role in the conflict in eastern Ukraine.