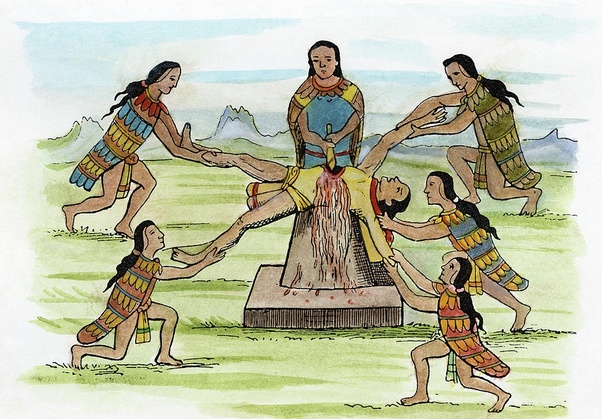 Easily the Aztec Empire. The actions of these people horrified even the Spanish that would later conquer them. Part of the reason ancient Mexico was conquered so easily was because the local tribes the Aztecs had conquered turned on their masters because they would rather be under the control of the Spanish.

The Aztecs sacrificed huge numbers of men, women and children by cutting their heart out while they were still alive. In spring, children would be sacrificed to Tlaloc to ask for rain to help crops grow. It was believed that if the children cried on the way to be sacrificed, that would ensure plentiful rain that year – and so they’d be jabbed with thorns to ensure a good omen. After all the sacrifices were killed (they once killed 80 thousand people in a single ceremony) the bodies were then mutilated and eaten by the priests and nobles.

One particular Aztec festival, Tlacaxipehualiztli, called for the noble clans to make a human sacrifice (as expected in Aztec culture) and then carefully peel the skin off their victim to wear as a cloak. Another festival involved a woman being dressed up as an Aztec goddess, then having 4 males burned alive in front of her. She would then be sacrificed herself in the usual way (heart cut out, then her body eaten).

The Aztecs would conquer their neighbouring tribes and then celebrate by sacrificing the entirety of their enemy’s warriors and eating their brains (they believed this would give them the warrior’s skills). They would then demand regular victims from their vassals to be later sacrificed. Estimates say that the Aztecs would sacrifice 80 thousand people every single year.

The Aztec capital of Tenochtitlan possessed a massive skull rack outside the front of their grand temple. The Spanish counted over 132 thousand human skulls on that rack.

After the Aztecs migrated south from Durango and first came into contact with the rest of Mesoamerica, they were initially provided sanctuary by the king of Culhuacán, and arranged a marriage between their leader and the daughter of the king. The Aztec leader sacrificed her and wore her skin as a cloak, then met the king still wearing the skin of his murdered daughter.

The Aztecs were a race of murderous cannibals. They ruled Mesoamerica through terror and bloodshed. They would smile at you then murder your entire family behind your back. For the atrocities the Aztecs had committed, they deserved to be conquered by the Spanish.